Join our community on Discord

How it is calculated

The goal of this interactive map is to show engineer's experience in the codebase area and knowledge distribution between team members. 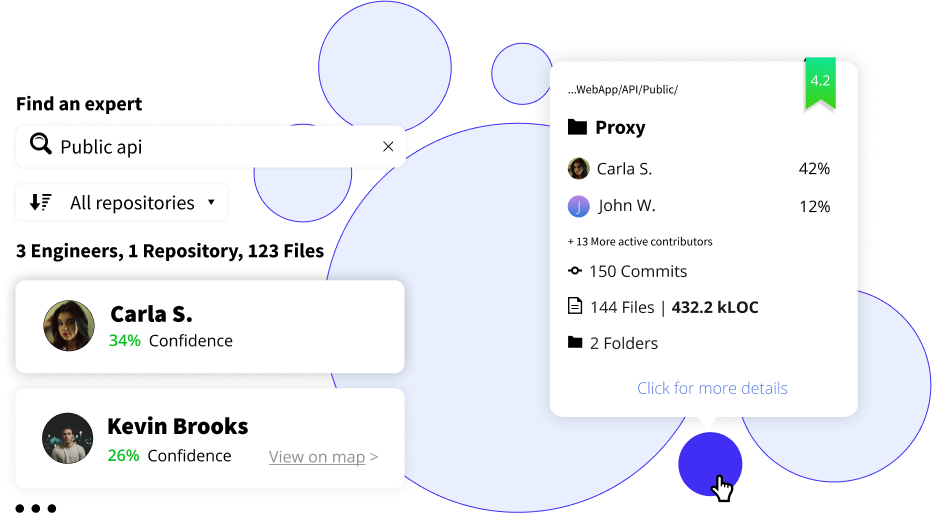 How it is calculated

Metrics are calculated based on commits made to any branches currently detected by Codigy, except branches that are ignored (in example release branches).

Reduce long-term threats to your product

It's exactly like having backups. If the knowledge is owned by a single engineer and no one can step in - it's risky.

Maintaining high levels of ownership and low levels of lost-knowledge with rotations and knowledge sharing practices.

If your team is working around the clock but the lost-knowledge keeps creeping in, it's probably because the product has outgrown your current team size.

An accurate map of experts can be used for peer-to-peer consultations or selecting speakers for team-wide events.

Lost knowledge - files that haven't been modified by anyone for a long time. It would take a similar amount of time for an original author to recover the working knowledge of these files as for a new engineer.

Lost knowledge is risky for a product as your team would either move slower in these files or have a significantly higher risk of defects.

Significant contributor - has similar qualities to that of the owner. An important role that significantly boosts the resilience of the product.

Contributor - holds a basic knowledge of the file, doesn't introduce any risks or benefits unless the file is overcrowded.

Files with no defined owner - have multiple contributors without sufficient knowledge to be classified as significant contributors or owners. Such files have a higher risk of defects.

Bus factor - estimates how many engineers could leave the current team before the product will come to a full stop.

Active set - highlights the files that were recently changed. Allows you to focus your attention on the issues that are relevant for your team right now. The period that is considered recent, can be configured in account settings.

For higher accuracy, we recommend excluding external libraries, autogenerated and binary files.
Excluded files will not be visible on the map and changes made in these files will not be reflected in Confidence map metrics.

Files that are already ignored by gitignore, will be excluded from you Codigy analytics. To exclude more files specifically from your Codigy analytics, please create a file following these guidelines:

Each line in a codigyignore file specifies a pattern. When deciding whether to ignore a path, Codigy checks codigyignore patterns from multiple sources, with the following order of precedence, from highest to lowest (within one level of precedence, the last matching pattern decides the outcome):

Two consecutive asterisks ("**") in patterns matched against full pathname may have special meaning: